Women today make up almost half of the medical workforce, but in the 1850s it was made nearly impossible for them to join the profession. On International Women’s Day we pay tribute to the persevering pioneers who challenged the status quo.

Johanna Kuila, one of our policy analysts, and a member of our staff Women’s Network*, tells us more.

There were 16,081 eminent doctors on the medical register when it first formed in 1859, but only one was a woman – Dr Elizabeth Blackwell.

At the time, women were barred from medical school in the UK but the register was open to anyone who had practised there before October 1858, regardless of where they attained their degree[1].

And, as the rules changed soon after, she remained the only female registrant for several years.

Thereafter anyone who wished to practise medicine needed a licence from a ‘qualified examining board’ – and female applicants were rejected.

This made a career in medicine nearly impossible for women in the UK.

But another evanescent loophole would be exposed by Dr Elizabeth Garrett who was able to join the register seven years later, in 1866.

Following several unsuccessful attempts to join a medical school, Dr Garrett discovered the Society of Apothecaries, which had not expressly barred women from its exams.

But once again, swift action was taken to effectively block women from this route. The Society banned private tuition after learning Dr Garrett had relied on this to qualify.

Still this failed to crush ambition.

After several years of petitioning, Sophia Jex-Blake, and six other female students were admitted to Edinburgh University as undergraduates in 1869.[3]

The group, hailed the Edinburgh Seven, may have been allowed to study but they weren’t made to feel welcome. Male peers protested their presence. In one instance, 200 rallied together to barricade a classroom and hurl mud and rubbish at the female students.

Despite this, the women blitzed their studies. Edith Pechey, topped her chemistry class – an achievement for which she was denied a scholarship.[4]

The troupe’s biggest setback came in 1873, after a court ruled that they were not entitled to their degrees.

Finally in 1876 MP Russell Gurney brought a wrecking ball to one of the biggest barriers, by introducing the Medical Act of 1876[5], which, at long last, removed restrictions to medical registration on the grounds of sex.

Spurred on, the determined Jex-Blake joined Dr Garrett and other medical women to establish the London School of Medicine for Women. This was the first British institution dedicated to training women to be physicians. This gave aspiring female doctors an avenue to pursue a career. 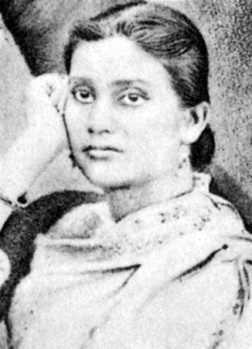 It took some time for the number of women on the register to grow, and for the group to become more diverse. By 1891 there were 29,426 men on the register, and 129 women. After becoming one of the first women to attain a medical degree in India, Dr Kadambini Ganguly became the first Indian woman to join the GMC register in 1894[6].

The two World Wars changed the shape of society. As men went to fight, women started to play a greater role in the workforce. By 1931 women made up about 10 per cent of the medical register.

Sixty years later, in 1991, women represented just over a quarter of the UK register. Just under three decades later, the number of female doctors would more than double. 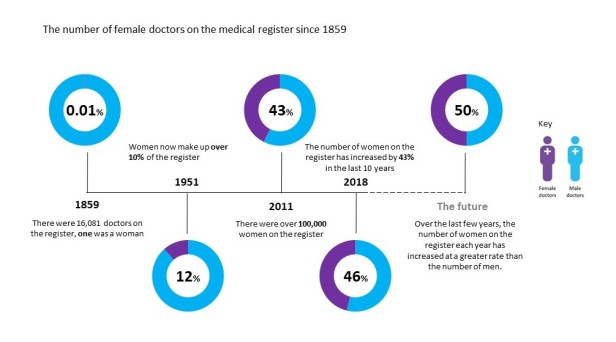 After over 160 years of hard-work and dogged perseverance it is exciting to see how far we have come.

Women now outnumber men on the GP register as well as in a number of specialities including public health, paediatrics, and obstetrics and gynaecology.

Last year we appointed our first female Chair, Dame Clare Marx, who built her successful career in the UK’s most male dominated speciality – surgery – where today women comprise just 13 per cent of the cohort.

This International Women’s Day calls on employers to Balance for Better.

For years women have fought for their right to work, vote and receive fair treatment.  As we look to tackle current and future challenges, we can draw great inspiration from the perseverance of those first ground breaking female medics.

Know an amazing female doctor? Leave your tributes in the comments below.

*The GMC Women’s Network offers a place for staff to come together, share their knowledge and experience, and discuss issues facing women.

[2] Elston, Mary. Women doctors in the British Health Services: A sociological study of their careers and opportunities. PhD thesis, University of Leeds, 1986.

[3] University of Edinburgh, Sophia Jex-Blake and the Edinburgh Seven, 2018, www.ed.ac.uk

6 thoughts on “Registering equality: how women had to fight their way into the profession”