This Friday marks VE Day, when WW2 came to an end in Europe after nearly six years of devastating conflict.

Here, Courtney Brucato, from the GMC’s archives team, documents the role of doctors during the war effort and how they came to be registered.

On 08 May 1945, people across Britain took to the streets to celebrate that long-awaited day, the end of WW2, and to commemorate the sacrifice of all those who made it possible.

Amongst those in the thoughts of the crowds that day were the doctors who came from overseas to help in the war effort, sometimes at great personal cost.

In September 1940, the GMC used emergency powers for the first time when the government issued a directive to grant temporary registration to doctors who had qualified in the USA and Canada.

80 years later, we find ourselves using our modern emergency powers to once more support our health services in an emergency, during the coronavirus pandemic. This time over 30,000 doctors and about 4,500 final year medical students have joined the register, answering the call as overseas medics did all those years ago.

The first doctors to receive temporary registration from the GMC back in 1940 were Dr Brown and Dr Belt from Canada.

They were soon joined by a further seven Canadian volunteers, along with nine from the USA. Dr Henry Heyl, a neurosurgeon who volunteered alongside his brother James, was amongst their number. In 1941, Dr Heyl treated seven-year-old Royston Curtis who’d been injured in a Nazi bombing raid and lost the ability to speak. After a successful operation by Heyl, Royston regained his voice.

The following year, Dr Helen Doris Howell became one of the first woman to be granted temporary registration under the emergency powers. Dr Howell made her own way overseas to volunteer with the Red Cross after she was refused entry into the Canadian Army because of her gender.

A second government directive in January 1941 extended temporary registration to doctors from other foreign countries, allowing them to practise within the armed forces or at designated hospitals and institutions treating civilian casualties.

That April, President Franklin Roosevelt issued a public appeal for 1,000 American doctors to volunteer to travel to Britain to care for wounded soldiers and civilian victims of Nazi air raid attacks. In an evening statement, he declared: “The young doctors whom Great Britain so desperately needs can do much to heal the wounds inflicted alike upon civilians and military in this cruel war”. By 21 May 1941, there were 294 doctors temporarily registered to work in the armed forces or in civilian hospitals.[1]

They were later joined by 9 female compatriots, who volunteered to support the Allied cause before the USA officially joined the war in December 1941. Among their number was Lady Margaret Ramsden, who also served during WW1 as a surgeon with the Red Cross Medical Service in France. She would have been just shy of 60 when she was granted temporary registration in May 1941.

The willingness of these overseas doctors to step forward radically changed the composition of the GMC’s medical register. Between 1941-5, 3,425 foreign doctors joined the register compared to just 281 in the five preceding years.

By 1945, the ‘Colonial’ and ‘Foreign’ categories on the register contained thousands of doctors registered under the emergency powers. 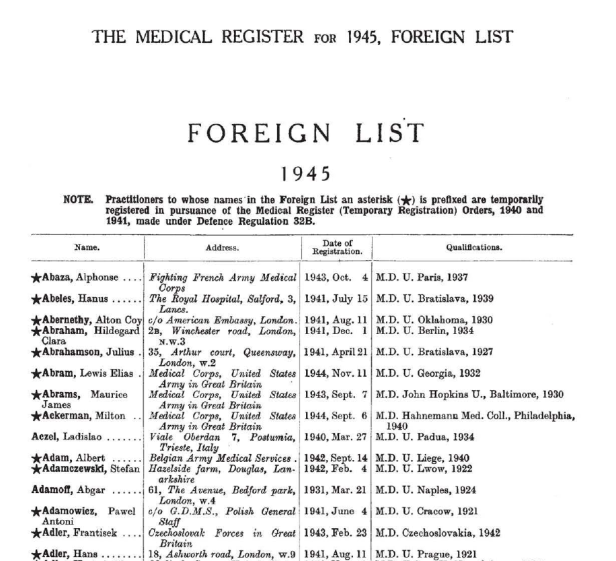 Today, doctors on the GMC register are once again at the heart of the national response to a deadly threat. To all those medics – past and present – who come forward at a time of unprecedented need, thank you.